Showing posts from July, 2015
Show all

Here's Looking at You-The Beast with a Million Eyes 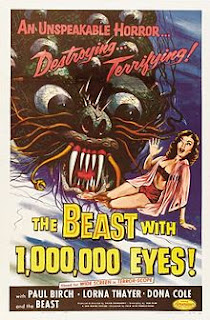 The Beast with Million Eyes (1955)
"...because it will seem like I see your most secret acts, you will know me as the beast with a million eyes."  Alien
If you watch this flick expecting to see a multi-eyed creature you will be sorely disappointed. Yes, I know the movie poster and opening credit art hint at such a creature. The actual “beast” is an alien with the power to control animals (and eventually humans) to do its bidding.  The alien’s vision is expanded through the creatures it controls.  When the alien’s ship lands outside a remote date farm, the Kelley family is forced to get a grip on their various issues in order to fight the alien threat.
The premise is promising but falls short in delivery.  While an all encompassing animal attack on humanity could be terrifying as in Hitchcock’sThe Birds  or James Patterson’s Zoo  most of the attacks in this flick seem more silly than scary.  Maybe it is because a flock of churlish chickens or a single rampaging cow is not a…
Post a Comment
Read more
More posts