Showing posts from December, 2016
Show all

A Ghost of an Idea 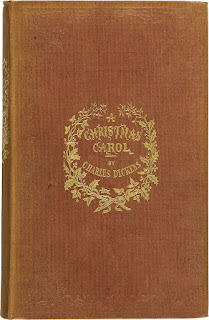 “I have endeavored in this Ghostly little book, to raise the Ghost of an Idea, which shall not put my readers out of humor with themselves, with each other, with the season or with me. May it haunt their house pleasantly, and no one wish to lay it.”  Charles Dickens-December 1843
People respond to suffering in different ways.  Moved by the plight of children working in the Cornish tin mines, Charles Dickens gave a series of speeches imploring audiences to fight ignorance with educational reform. He then considered writing an inexpensive political pamphlet, but opted instead for writing fiction finishing the novella in six weeks.  Published on December 19, 1843, the first run of 6,000 copies of A Christmas Carol sold out by Christmas Eve.
It always amazes me what other creative endeavors are inspired by a single story.  Less than two months after publication, there were at least eight theatrical versions in production.  Scrooge’s tale of redemption has been portrayed in a variety of s…
2 comments
Read more
More posts